A group of US Navy scientists are in the midst of developing a robotic jellyfish which is powered by the same materials as an organic jellyfish–the water around them. Can you imagine the possibilities this presents? This means our electronics could be powered by the same natural elements as biotic beings. Cell phones could breathe air. iPads could re-charge on pizza. Laptops would function more efficiently after a great workout.

Alright alright, maybe it’s not that simple (or whimsical,) but think about the conceptions we have of artificial intelligence, cyborgs, and robots. Robin Williams’s Bicentennial Man plugs into the wall. Minority Report’s predictive pre-cogs live in an electro-wave sensing jelly. We don’t see robots or future cyborgs as our equals. They are very much still considered the “other,” and to many, a negative external entity. But imagine, a robot on your level of humanity. One that feeds off of the same fuels as you. Not necessarily that your Roomba is going to start sharing your love of a bangin’ BLT or anything, but rather that a personal assistant ‘borg might be able to sit down with you to dinner. It might be able to sense that you used more basil in tonight’s pesto penne dinner, compliment you on the vibrant flavor. It might be able to note that you haven’t had a meal with fish in over a month, and maybe the lack of protein is what’s been making you feel so sluggish? It might suggest the 1-day sale on tilapia and shrimp at the supermarket. It might remind you that the Comcast building is right next to the grocery store, and you’ve been meaning to trade out that old box for one with DVR. It might recommend the sitcom Parks & Recreation to watch tonight after dinner, suggested after you finished all the seasons of 30 Rock on Netflix (and because the ‘bot has been missing Amy Poehler ever since she left SNL.)

Do you see what I am getting at? Maybe we wouldn’t view the robots of the future in the light of a perceived apocalyptic fear if we were able to simply relate. There may be people in your life who you (even subconsciously) view as “tools.” That girl from my class who I make outlines with before the test. That guy at work who always helps me figure out the espresso machine. They are helpers. Aids. Acquaintances. And they are treated as such. But when that guy at work that helps with the espresso notes that he saw your photos from the Mediterranean islands at your desk and suggests a place to buy real beans like they have in Europe, suddenly the relationship has been elevated. There is a personal connection. Your social discourse will evolve and expand as your relation becomes leveled with one another.

Awareness, as always, is the key to avoiding internal collapse. Perhaps the future of our cyborgs can evolve into a digital friendship. At the least, a level of personal respect must be established with our electronics if we are to evolve in a healthy and symbiotic relationship. I mean really, do you think all those robots in the movies were revolting because they were getting too much respect?

Now THIS is what I’m talking about when I hashtag #thecyborgsarecoming on Twitter. For all you skeptics who think the merger of technology and the body is nothing but trouble, please check this article out. This clinical tongue piercing allows the user to control a wheelchair via sensors implanted into a retainer. Check it out here at Popular Science. 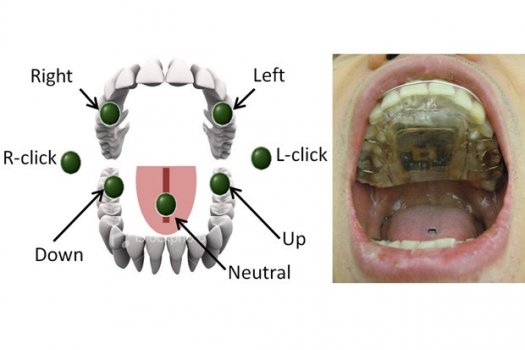 Yeah, this is happening.