Today, I went to DC’s Newseum, a museum exploring the ways in which the news-reporting industry has grown and evolved over the years. I went with my class, #internet (how digitalcocoon-esque,) and was fairly unsure of what to expect. We visited the HP New Media Gallery, and it was a social media extravaganza. I felt as if I’d been dropped into a digital empire from a neo-noir film, except a new governor had been put in place to clean up the hardware rubbish, eliminate cyborg corruption and Web 3.0 the whole dang thing (can I start using that term yet?) 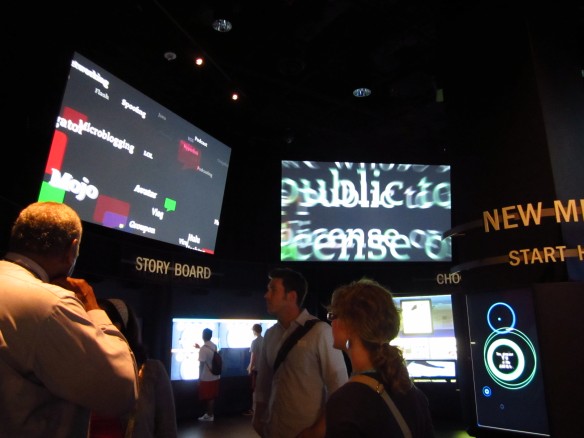 The HP New Media Gallery explores the new ways in which we receive our news, interact with those sources, and communicate with others about the stories we care about. Without necessarily having a big definition of what “New Media” is attached to a daunting digital display, the back wall of the round viewing room is surrounded by four large screens, each projecting a different visual with one audio track, each video seamlessly interacting with the audio, pieces to the same puzzle. 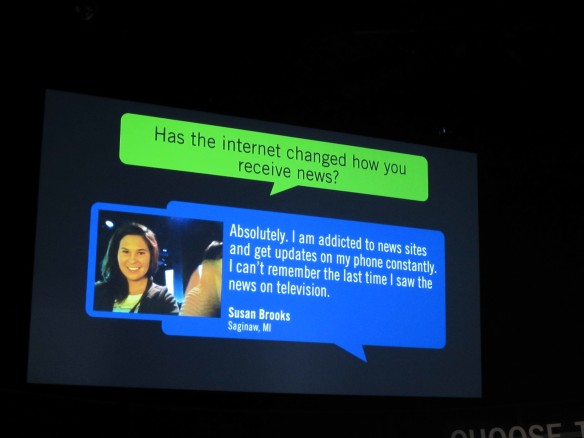 The “user” of the New Media Gallery (formerly known as “museum go-er”) can decide which screen to pay attention to, whether it’s milestones in social/new media infiltration (2011: Tweeting is Allowed in Supreme Court) or headshots of the founding fathers and maiden mothers of New Media like Facebook’s Mark Zuckerberg or Huffington Post’s Arianna Huffington. Foregoing a definition, the Newseum attempts rather to achieve an “essence” of New Media. Smart if you ask me, as the meaning, function, and impact is bound to continually change. “What Does New Media Mean to You” flashes before the user in hot pink block-faced letters. “I love it” “A world of information” “Participation.” The four screens can be a bit distracting–do I focus here, my peripherals are calling me over here, clips of an interactive Angry Birds game entices my gaze over there. But yet, the user walks away with a full understanding of the aura that is “New Media.” Incidentally, this is exactly the way in which the user interacts with the Internet. The content is a bit distracting. A tad fragmented. But overall, the user gets the jist of what’s going on. 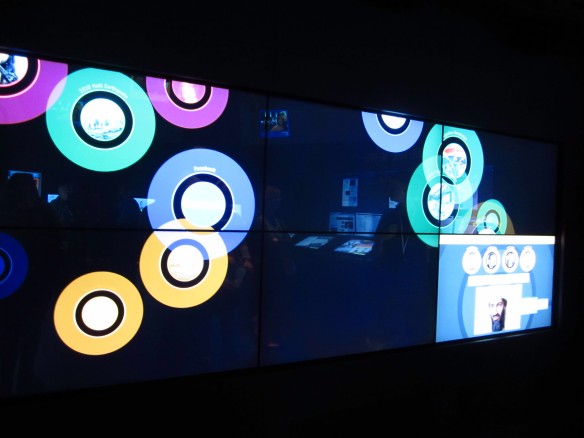 An interactive wall of bouncing orbs feature 30 news stories, all of which found a voice through viral media sources. The user is invited to explore the evolution of the Apple brand or, how an event like Michael Jackson’s death sprouted from inception to public awareness. Users are asked simple Yes or No polls at the end of each story. Two teenage boys giggle and prod at the story of Justin Bieber’s rise to fame. “Do you think Justin Bieber would have been discovered without YouTube?” An awkward two-step towards the screen and a bursting “NO!” comes from one boy as he casts his vote (I humbly disagree.) 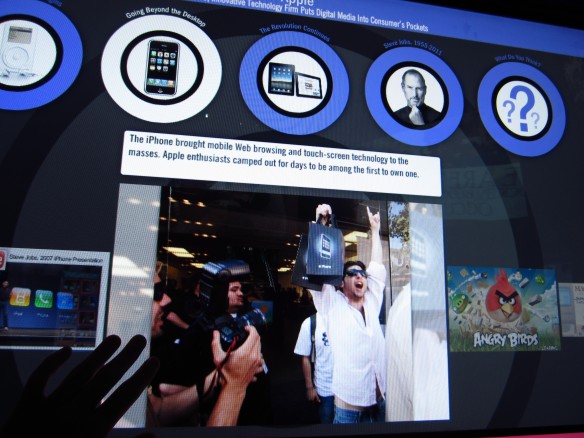 The HP New Media Gallery at the Newseum is a perfect example of a successful interactive exhibit. The actual phenomena explored were put to use, as the New Media Gallery exists on the web. Pictures of visitors are shared online when they virtually “check-in,” a stream visible anywhere with an internet connection. Inside the exhibit, a Twitter stream is on display broadcasting those talking about the exhibit.

The user experience was fluid, visitors entered the exhibit with curious eyes, some skimming the surface, others diving into the interactive XBOX Kinect games designed for the gallery. The Newseum is located at 555 Pennsylvania Avenue in DC. Coming highly recommended to you from the digital cocoon.